Mr.Lilov is the owner of his importing company which is focusing on excavator, tractor and trunk parts' importing

According to Mr.Liov, it was at the beginning stage of his business when we made our first deal. He was been told that he should look for some suppliers offering good price in Chinese B2B platform, but everything did not go well at the first step. Before Mr.Lilov get in touch with us, he already made some purchase on the Platform for excavator bucket teeth and oil seals. The price was very attractive, and everything else looks fine on the photos and videos. However, he received bounch of defective products at the end.

After Mr.Lilov got in touch with Jeremy, one of our sales, we've been communicating a lot about the market insights, and he receivied lots of sourcing suggestion from Jeremy. We didn't want to be rushing to make a deal, instead, we helped Mr.Liov went through the problems he've got by providing lots of technical data, drawings, and photos. We were been told afterwards by Mr.Liov that "I really appreciate your patience with me".

It was around June, 2017, due to a bill of lading mistake made by Mr.Liov and he couldn't clear the customs, products worth tens of thousands dollars were detained at the customs. We totally understand that this loss might be beyond Mr.Liov's affordablity since his business was just at the starting period. And he was very anxious at that time. He started accusing Jeremy for not handling the order well, and also complain a lot to the company about how Jeremy fail to do the job, He won't make business with us anymore. We immediately organized a meeting as soon as we heard it from Jeremy,

What Mr.Liov said or done was totally understandable. We never accuse back to our customers when they were anxious or in a bad emotion. Instead, we tried our best to communicating with the freight forwader and finally brought Mr.Liov's good forward at the customs' deadline. We received big thanks from Mr.Liov after that. And now, we have been working together for four years. Our cocmpany will always emphasize dealing with the problem first, as soon as it occurs, then figured out who's right or worng afterwards.

After acquired the permission from Mr.Liov, we will post some of our chat records below: 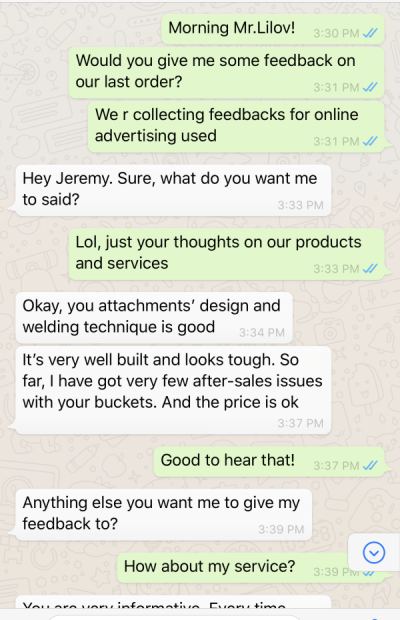 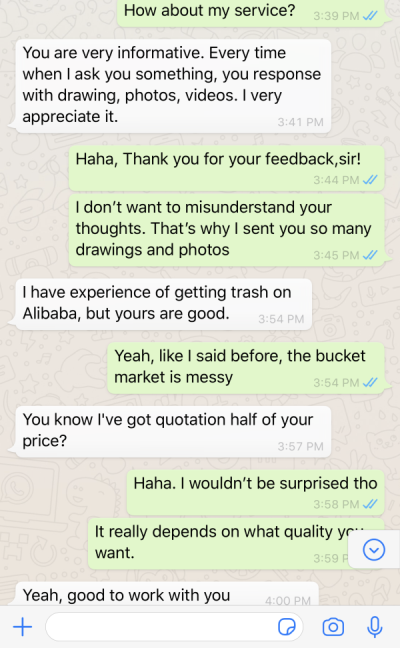